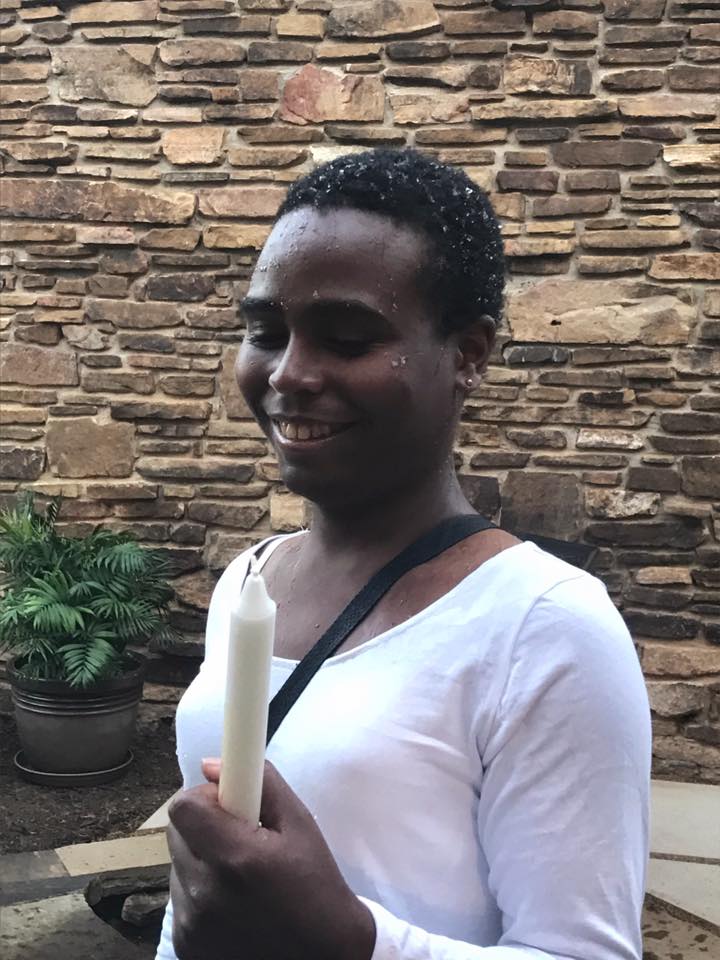 I met Amrita shortly after I moved to Northwest Arkansas in 2016, and she quickly became a part of my life. Before I really knew her particularly well, Amrita elected to travel with a group I led to Standing Rock. We camped and cooked, protested and volunteered side by side. In the process, we learned a lot about each other. On our first stop for food around a table at Denny’s, Amrita pointed to each of us and assessed how comfortable we were with ourselves. I think she told me that I was 80% comfortable with myself – which is a pretty good score, if you ask me. This was the way she was – Amrita spoke what was on her mind. She was direct, imaginative, and inquisitive. She was not shy. At the end of our time at the camp, as we walked around, she knew just about everyone we passed by. Amrita was magnetic; people were drawn to her. If she were asked to describe why this was, she’d probably tell us it was because she was an empath with positive energy.

When we returned to Fayetteville, Amrita was filled up with passion. I remember her talking about how her experience joining the community in North Dakota resisting the Dakota Access Pipeline inspired her to become more active. This wasn’t just talk. At every rally or march in Northwest Arkansas that I attended from that day forward, Amrita was there to greet me smiling and holding a sign – embodying loving kindness. At the same time that she was inspired and showed up for good – I know that doing so was hard for her. In our conversations about being active, Amrita talked about how fighting for what was good and right also meant learning about the things in our world which are hard and harmful. This tension is true for all of us; Amrita named it and felt it deeply. The two of us talked about this quite a bit.

There was a stretch of time when Amrita would come to St. Martin’s every day. I would be working in my office and she would show up to use the internet and watch Supernatural. I ended up giving her a user on my Netflix account because the amount of Sci-Fi she was watching was interfering with my own recommended watch list. Though she could immerse herself in escapism, she was always quick to help me with any project I was working on. I can’t look anywhere around St. Martin’s without seeing Amrita. Together we painted the kitchen, laid mulch in the yard, moved furniture, cooked several dozen community meals, and the list goes on. This was the way she was – generous. She poured herself into the things she loved.

And this included whatever was her current obsession. While we worked on the building or cut vegetables and stirred pots, she’d give me a full run down on astrology or the dangers of cooking in aluminum or the benefits of eating for your blood-type. Whatever was her current thing, she did her research. In all of these things – Amrita was ceaselessly searching for health and wholeness. I am so very sad that she never found this in life, but I know that she is whole now.

In the nearly two years since I met Amrita, I knew of and supported her through three suicide attempts. Many of us here today visited her in the hospital and in behavioral health, welcomed her into our homes, and did our best to help her access the resources she needed. We knew of her ongoing struggle and we did all that we could to help her gain the resources she needed to heal. We did this because we loved her and because Amrita was a member of our family. I know lots of people who would say the same thing. She lived with us for a month while we waited for her application to the city housing program to go through. Then, when her apartment in the same complex was secured, she was our neighbor. She knew our other neighbors in the complex after two months better than Matthew knew them after living there two years. We always saw her in the club house, at the pool, having dinner with other tenants, and waving to us from her doorway with a giant grin. She shone light and life into our neighborhood in the same way she did in every community she was a part of.

We are mourning the loss of our friend and loved one. I am sad, angry, and feel defeated. This grief is heavy. I believe Amrita’s death has everything to do with being a black trans woman and survivor. She fought every day to live in a world that did not make space for her to exist. She exhausted every resource available to her that we could find, and none of them were enough to make this world a safe place for her. We were constantly frustrated that the help she needed was not available; services for those who need it most desperately are non-existent or inadequate. From mental health to transgender health care to housing to social services – there is so much that needs to change in order for this world to be a place that can care for all of the people we love, including Amrita. I will continue to work tirelessly to make our world a safer place, to advocate for necessary services and resources, and to dismantle a world that destroys black and trans bodies and souls. I know this is what Amrita would want us to do. Making the world a safer place wasn’t a choice for her.

Amrita, for a while, talked about wanting to be a dragon – flying above our heads and destroying evil. Her imagination was limitless. This curiosity and creativity was a part of her spirit even when she was having a difficult time. Every day that I spent with her was filled with wonder and laughter. She enjoyed mocking me and loved a good prank. She’d often jump out from a hiding place and scare me, tossing herself into a fit of giggles. She was also hopeful, she became convinced that there were angels all around us and that she was one of them. If she wasn’t then, she is now. Amrita is an angel, pouring her love and positive energy into our hearts and filling us up completely. Amrita, our dragon, breathes the fire of passion into our hearts and inspires us in the way she was inspired to imagine the world into being a better place.